Riding in the City

If you are a newer rider that lives in a major city and wants to know the ins and outs of city riding, then you’ve come to the right place. Even if you are a seasoned rider, but you have yet to have the chance to ride on busy city streets, then it is good for you to know what you are in for. So, here is what you should about riding your motorcycle on the bustling city streets.

If you are used to wide-open stretches of land that allow you to coast at a nice speed while not having to worry about vehicles swerving around you, then you are in for a major wake up call. City streets can be packed to the gills with cars at most times of the day and cities are known for their aggressive driving.

So, don’t expect those cars who are constantly switching lanes to double-check if you are in their way. This can make city riding more dangerous since more people may be distracted, or they just aren’t paying attention because they are moving very fast, and they make split-second decisions without thinking about their biker counterparts.

Seeing someone from across a wide, open street is very different than picking out a motorcycle from a sea of cars. You may think that in the bright light of day that this wouldn’t be an issue, but any rider will tell you that it is. So, it is important to make yourself seen.

This could be by having a bright-colored motorcycle, using your lights even during the day, or having a helmet that is hard to miss. These things can make you a little safer because anything that catches a driver’s eye will help them to see you and could help prevent an unfortunate accident.

When driving in rural areas, you may get used to taking it easy since you don’t have to dodge cars on the road and swerve between passing vehicles. However, if you are riding in the city, you should realize that it is in your best interest to not ride too assertively. This means that you shouldn’t be almost side-swiping every car you pass and aggressively moving around cars in your way.

First off, this is a good way to get drivers to flip you the bird. City drivers are usually in a hurry and seeing someone riding a motorcycle and weaving in between traffic like crazy will likely anger them a bit. This could also make those around you drive more aggressively, which will make things unsafe for you.

Second, if you are not used to city drivers, then this could also cause you to make a mistake and end up in a collision. With vehicles making turns in intersections, and the high possibility of seeing a car speed up to beat a yellow light before it turns red could all potentially threaten your safety. So, it is in your best interest to keep calm and not ride too assertively.

If you are planning on making a right turn, then you need to be practicing your shoulder checking. This lets you check your blind spot for other cars or pedestrians, and lets them know that you are getting ready to turn. This is not really necessary on rural streets because you are not likely to have a pedestrian crossing your path, or a car sneaking passed to make a right turn.

In the city, you will have both of these issues to worry about. So, you should get used to doing it every time you plan to make a right turn.

The way that you position your bike in the lane is another way to stay safe on the road by making yourself more visible to other vehicles. When you are getting ready to weave between cars, you should position yourself on the side that you are passing on, so that you can make sure that the car in front of you sees your lights clearly.

This will let them get a clear view of you and know that you are there, and about to make a move. If you sit in the middle of the lane, then it is difficult for them to see you and there is a higher chance that they could switch lanes at the same time as you and potentially cause a collision.

So, always keep in mind that you should position yourself in a way that allows you to be easily seen.

When on city streets, there is a lot going on at one time. With busy intersections, unprotected turns, and right turns on red lights, there are many ways to find yourself being distracted by all that is going on. This could cause you to miss something and result in a collision or accident.

Scanning constantly when on the road is important and can keep you abreast of what is going on around you at all times. This can save you from making a left turn if the car going the opposite way left their blinker on but actually go straight. This could be a huge issue, but if you are watching out for anything, then you can catch yourself before something bad happens.

When riding on city streets, you should also make sure that you have an escape route planned whenever you make a move. This could be giving yourself a bit more space to get into the next lane so that you have room to backtrack if the cars around you aren’t paying enough attention, or it could be knowing that you will have to pass a car near you.

Either way, you want to have a plan in place in case the cars around you don’t see you or make room for you. Knowing what your escape plan is in any situation can become second nature once you start to do it, so practice every time you ride so that you can get it down and not even have to think about it.

Riding on rural roads can be a nice escape because of the openness that it provides. Seeing few other vehicles on the road makes you feel less cramped and allows you to ride more peacefully. City streets are filled with cars packed tight together and can seem like a difficult place to navigate.

Well, you definitely have to get used to being in traffic as a rider, and know what you can and can’t do. With people switching lanes trying to get ahead of one another, you could be hit by a car driver that is not paying attention. So, learning to ride in traffic is something that you will just have to get used to.

With many more people on city streets than on rural roads, you will also have to get used to signaling. Drivers around you should know what you are going to do so that they can prepare. Whether you are making a right turn, switching lanes, or passing, the vehicles around you should be warned that you will be making a move.

Braking when Gearing Down

When you have long stretches of open rural areas to cover, you don’t have to do in terms of shifting because you are staying at a steady pace for much of your ride. However, with city riding, you will have to get into the habit of braking when gearing down. You want to be in first gear by the time you stop – which in city streets will be often – so you want to learn this technique.

One of the most difficult things to deal with on city streets is the infamous left turn. What seems like such an easy task gets complicated by other cars, and if the turn is not protected, then the vehicles going in the opposite direction are an added safety issue. When there are vehicles making a right turn on red across from you, you may also have to worry about them hitting you too.

Cars have a hard enough time seeing other vehicles, but a slim motorcycle is even more ignored. You want to make sure that you are scanning the road to watch out for any potential collisions and ensure that you are clearly seen by those around you. Times like these, you want to honk your horn, turn on your high beams, and do whatever it takes to make other drivers see you.

City riding forces you to make lots of stops, turns, and lane switches throughout your ride. This can cause problems when the weather acts up and rain or snow starts to fall. Dealing with slick roads while turning can be a pain, and it increases your chances of slipping or losing control. This is especially true during the first few minutes of rain because the water can cause oils in the road to the surface, making the already slick road that much more slippery.

So, pulling off the road for a short break is a good idea if you aren’t used to riding in the rain. Then, once you get back on the road, you should ride more carefully.

Should I take a Motorcycle Safety Course? 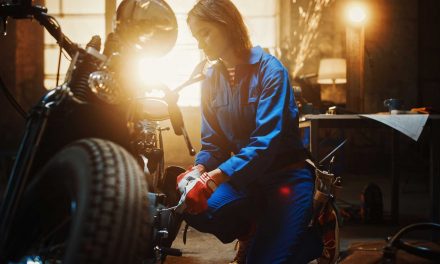 How Much Does It Cost To Own A Motorcycle

What is the Best Motorcycle Engine Size to Start on?

What is the Motorcycle Wave?